One of the joys/evils of Netflix is “binge watching”. For the past week I’ve been doing exactly that… enjoying the hilarious Archer.
I really enjoyed creator Adam Reed’s “Frisky Dingo” that was on Adult Swim several years back, so I thought I’d enjoy it… I actually enjoy it better.
It’s like Mad Men meets James Bond meets (one some people say, since I haven’t watched it) Arrested Development (where several of the voice actors acted on).
It’s filled with foul mouthed, totally un-pc jokes (nothing is sacred..race, gender, class, homosexuality) and one liners that are literally and or figuratively (one of the shows many runnings gags) that will make you laugh out loud.
Sterling Archer (who definitely has a Don Draper vibe to him) is a hugely handsome, suave, self centered, alcoholic, man-whore with Oedipus complex issues who just happens to be one of the best secret agents in the world. 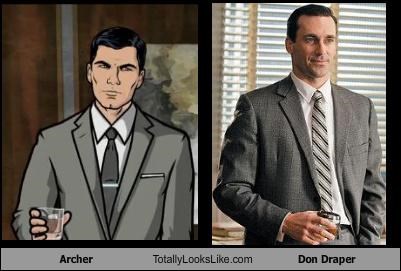 He’s simultaneously dim-witted while knowing tons of obscure facts about film, tv, literature and history.
The cast is rounded out by the sexy (at least bi-racial) Lana who seems to be the only one with any sense in the spy agency (though she has some sex issues), and extremely large hands.
Pam..gossip monster, bear claw loving HR manager who is, herself, a foul mouthed, sex-crazed, HR nightmare waiting to happen herself.
Cheryl- the totally airhead, LSD, choke sex loving wealthy heiress who is a useless secretary
Cyril- the stuffy/uptight comptroller/accountant who never gets to save the day.
Ray- The  VERY openly gay, West Virginian field agent
Dr. Krieger- who may not even be a doctor who spends most of his time experimenting on mechanical and organic monstrosities, and who is in love—with an Anime hologram.
And last but not least, Malory Archer, former Cold War spy and head of ISIS, who herself, a lot like Archer is an alcoholic self centered woman, (and mostly absentee mother) who keeps on chasing after money, and the older men who have them. As much as she hates her son, he always ends up getting him out of trouble.
The animation style has a highly stylized 60s comic book feel to it.
You also have no idea what year it takes place in. The KGB and Soviet Union still exists, Lana and Archer drive late 60s/early 70s muscle cars. The office computers appear to be Apple Lisa’s, while the mainframe computer are huge tape drives , but everyone has cell phones, GPS, Sat Phones and text messaging.
It takes A LOT to make me laugh, so Archer is definitely a keeper in my book. Makes me want to check out Arrested Development and SeaLab 2021 now…